Attachment is a special emotional relationship that involves an exchange of comfort, care, and pleasure. The roots of research on attachment began with Freud's theories about love, but another researcher is usually credited as the father of attachment theory. Bowlby shared the psychoanalytic view that early experiences in childhood have an important influence on development and behavior later in life. Our early attachment styles are established in childhood through the infant/caregiver relationship. In addition to this, Bowlby believed that attachment had an evolutionary component; it aids in survival. "The propensity to make strong emotional bonds to particular individuals

Attachment refers the particular way in which you relate to other people. Your style of attachment was formed at the very beginning of your life, during your first two years.  Once established, it is a style that stays with you and plays out today in how you relate in intimate relationships and in how you parent your children. Understanding your style of attachment is helpful because it offers you insight into how you felt and developed in your childhood. It also clarifies ways that you are emotionally limited as an adult and what you need to change to improve your close relationships and your relationship with your own children.

Young children need to develop a relationship with at least one primary caregiver in order for their social and emotional development to occur normally. Without this attachment, they will suffer serious psychological and social impairment. During the first two years, how the parents or caregivers respond to their infants establishes the types of patterns of attachment their children form.  These patterns will go on to guide the child’s feelings, thoughts and expectations as an adult in future relationships.

Bowlby believed that there are four distinguishing characteristics of attachment:

1) Proximity Maintenance - The desire to be near the people we are attached to.

2) Safe Haven - Returning to the attachment figure for comfort and safety in the face of a fear or threat.

3) Secure Base - The attachment figure acts as a base of security from which the child can explore the surrounding environment.

4) Separation Distress - Anxiety that occurs in the absence of the attachment figure.

During the 1970's, psychologist Mary Ainsworth further expanded upon Bowlby's groundbreaking work in her now-famous "Strange Situation" study. The study involved observing children between the ages of 12 to 18 months responding to a situation in which they were briefly left alone and then reunited with their mother (Ainsworth, 1978). 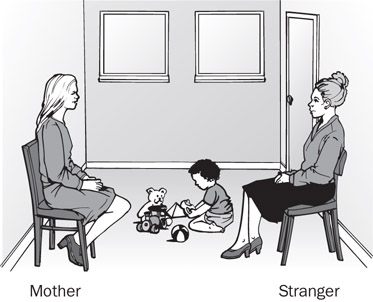 Based on these observations, Ainsworth concluded that there were three major styles of attachment:

Ideally, from the time infants are six months to two years of age, they form an emotional attachment to an adult who is attuned to them, that is, who is sensitive and responsive in their interactions with them. It is vital that this attachment figure remain a consistent caregiver throughout this period in a child’s life. During the second year, children begin to use the adult as a secure base from which to explore the world and become more independent. A child in this type of relationship is securely attached.

There are adults who are emotionally unavailable and, as a result, they are insensitive to and unaware of the needs of their children. They have little or no response when a child is hurting or distressed. These parents discourage crying and encourage independence. Often their children quickly develop into “little adults” who take care of themselves. These children pull away from needing anything from anyone else and are self-contained. They have formed an avoidant attachment with a misattuned parent.

Some adults are inconsistently attuned to their children. At times their responses are appropriate and nurturing but at other times they are intrusive and insensitive. Children with this kind of parenting are confused and insecure, not knowing what type of treatment to expect. They often feel suspicious and distrustful of their parent but at the same time they act clingy and desperate. These children have anambivalent/anxious attachment with their unpredictable parent.

When a parent or caregiver is abusive to a child, the child experiences the physical and emotional cruelty and frightening behavior as being life-threatening. This child is caught in a terrible dilemma: her survival instincts are telling her to flee to safety but safety is the very person who is terrifying her.  The attachment figure is the source of the child’s distress. In these situations, children typically disassociate from their selves. They detach from what is happening to them and what they are experiencing is blocked from their consciousness. Children in this conflicted state have disorganized attachments with their fearsome parental figures.

People who formed secure attachments in childhood have secure attachment patterns in adulthood. They have a strong sense of themselves and they desire close associations with others. They basically have a positive view of themselves, their partners and their relationships. Their lives are balanced: they are both secure in their independence and in their close relationships.

Those who had avoidant attachments in childhood most likely have dismissive attachment patterns as adults. These people tend to be loners; they regard relationships and emotions as being relatively unimportant. They are cerebral and suppress their feelings. Their typical response to conflict and stressful situations is to avoid them by distancing themselves. These people’s lives are not balanced: they are inward and isolated, and emotionally removed from themselves and others.

Children who have an ambivalent/anxious attachment often grow up to have preoccupied attachment patterns. As adults, they are self-critical and insecure. They seek approval and reassurance from others, yet this never relieves their self-doubt. In their relationships, deep-seated feelings that they are going to be rejected make them worried and not trusting. This drives them to act clingy and overly dependent with their partner. These people’s lives are not balanced: their insecurity leaves them turned against themselves and emotionally desperate in their relationships.

People who grew up with disorganized attachments often develop fearful-avoidant patterns of attachment. Since, as children, they detached from their feelings during times of trauma, as adults, they continue to be somewhat detached from themselves. They desire relationships and are comfortable in them until they develop emotionally close. At this point, the feelings that were repressed in childhood begin to resurface and, with no awareness of them being from the past, they are experienced in the present. The person is no longer in life today but rather, is suddenly re-living an old trauma. These people’s lives are not balanced: they do not have a coherent sense of themselves nor do they have a clear connection with others.