Is your brain not working properly, perhaps you have brain fog, struggle getting up in the morning, struggle in real;ationships, struggle with daily tasks or struggle with memory, attention and focus ? We have a world unique holistic bioHacking program for you incorporating the latest research in gut science, neuroscience, and interpersonal neurobiology. This program will focus on culinary medicine, lifestyle medicine, stress management, relationship coaching and trauma recovery with the goal of upgrading all areas of your love, life and career. The Ultimate BioHacking Program. 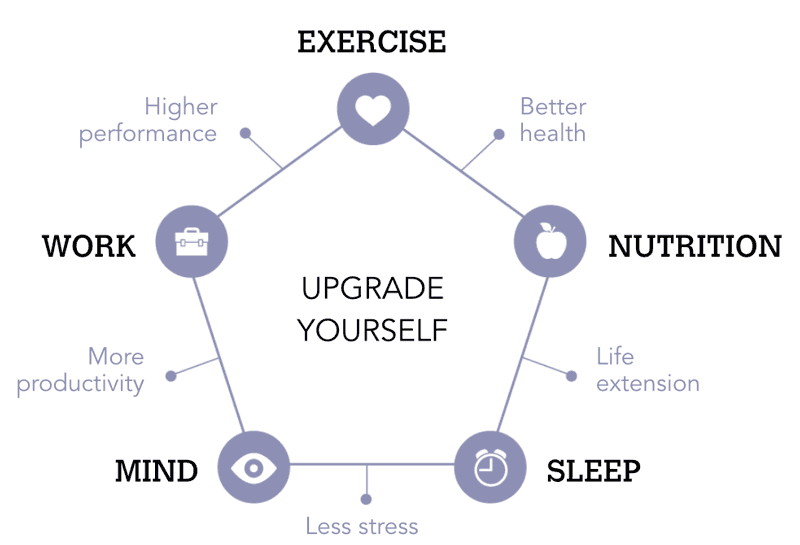 Exposure to extreme threat, particularly early in life, combined with a lack of adequate caregiving responses significantly affect the long-term capacity of the human organism to modulate the response of the sympathetic and parasympathetic nervous systems in response to subsequent stress. The sympathetic nervous system (SNS) is primarily geared to mobilization by preparing the body for action by increasing cardiac output, stimulating sweat glands, and by inhibiting the gastrointestinal tract. Since the SNS has long been associated with emotion, a great deal of work on the role of the SNS has been collected to identify autonomic “signatures” of specific affective states. Overall, increased adrenergic activity is found in about two-thirds of traumatized children and adults. The parasympathetic branch of the ANS not only influences HR independently of the sympathetic branch, but makes a greater contribution to HR, including resting HR. Vagal fibers originating in the brainstem affect emotional and behavioral responses to stress by inhibiting sympathetic influence to the sinoatrial node and promoting rapid decreases in metabolic output that enable almost instantaneous shifts in behavioral state. The parasympathetic system consists of two branches: the ventral vagal complex (VVC) and the dorsal vagal complex (DVC) systems. The DVC is primarily associated with digestive, taste, and hypoxic responses in mammals. The DVC contributes to pathophysiological conditions including the formation of ulcers via excess gastric secretion and colitis. In contrast, the VVC has the primary control of supradiaphragmatic visceral organs including the larynx, pharynx, bronchi, esophagus, and heart. The VVC inhibits the mobilization of the SNS, enabling rapid engagement and disengagement in the environment. 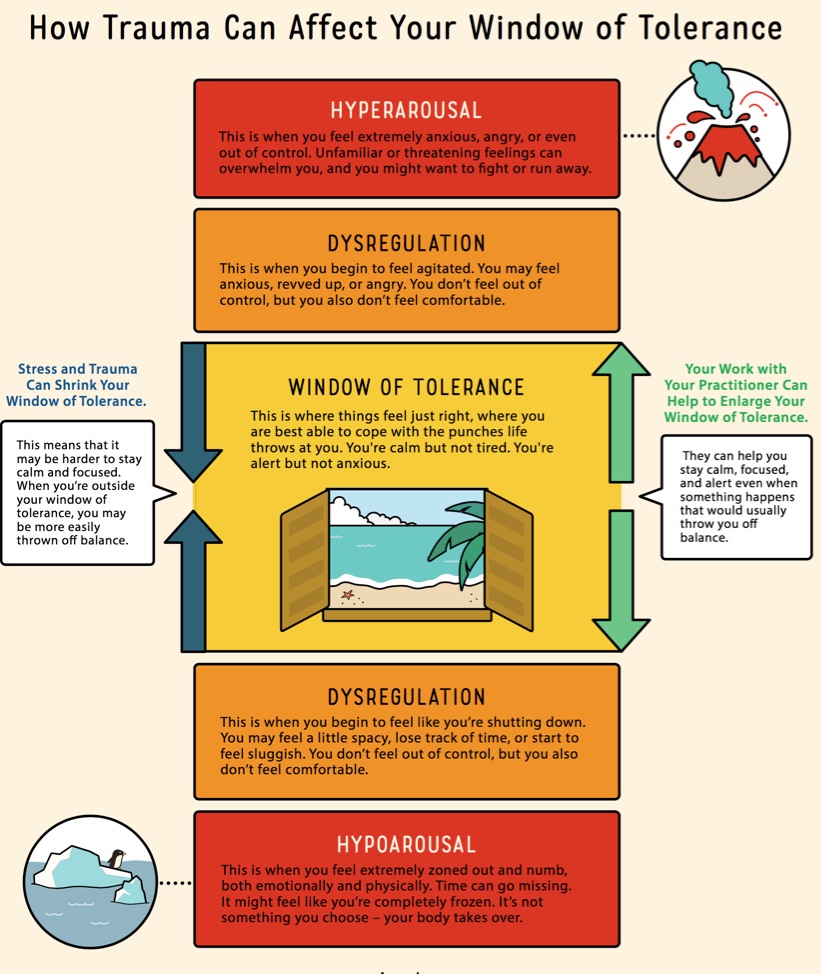 The Dorsal Vagal State and manifestation of autoimmune disorders

People who are in the dorsal vagal state a lot which is the state when the amygdala is activated due to a detection of a slight threat in the environment consciously or unconsciously through neuroception and the traumatized person goes into a state of learned helplessness or what is called dissociation or freeze response which is an unconscious conditioned fear response, the body’s reflex to an internal or external stimuli from a cue of an original trauma. This will activate all the viscera, your heart, your lungs, your colon, your stomach, all of these are run unconsciously by the dorsal vagal nucleus and if you have syndromes where you are in the freeze response a lot, the dorsal vagal nucleus will be hyperactive and you will get syndromes of hyperactivity within the viscera and that can be characterized by Irritable bowel disease, colitis and other autoimmune diseases.

These are cyclical diseases which means they oscillate between sympathetic and parasympathetic nervous system meaning the symptoms come and go which is why the medical profession very often can not diagnose the problem or refer to it as psychosomatic meaning it is a condition of the mind when in fact it is actually emotionally driven physiological conditions of the gut and the brain. Problems with the gut are common with people who have had trauma, it is the physiology of trauma that drives these conditions and so if you heal the trauma you can heal the disease. These conditions are also referred to as neurosomatic, which means they are brain based conditions, physical conditions caused by abnormal function of the brain.

The Amygdala is the agent of fear conditioning, it stores emotionally based memory positive and negative, it is also the gate keeper for responding to threat by activating the fight or flight response, when the fight or flight response is not successful, such as you can not escape the traumatic event, the body goes into a freeze response. The freeze response is predicated by the effects of early childhood experiences, the freeze response is also called dissociation. When dissociation happens you are dysregulated, Dissociation is based a lot on what happened in childhood that allowed you to develop the brain in a way to prevent that from happening too easy. This has to do with Allan Schore’s work on attunement, the part of the brain that controls this regulation of autonomic nervous system and emotional system, which is the orbital frontal cortex. This develops in a healthy attuned infant and shrinks in a neglected infant. We need a developed orbital frontal cortex to regulate us over our lifetime and prevent us from going into freeze states and dysregulation. Helplessness is the essential ingredient for the freeze response.

The freeze response is a motor action, which perpetuates the escape behaviour in a way that erases all the procedural (Implicit) memory of that trauma. If you have a threat and don’t discharge the freeze response, you are conditioned thereafter to any body cues related to that traumatic event. 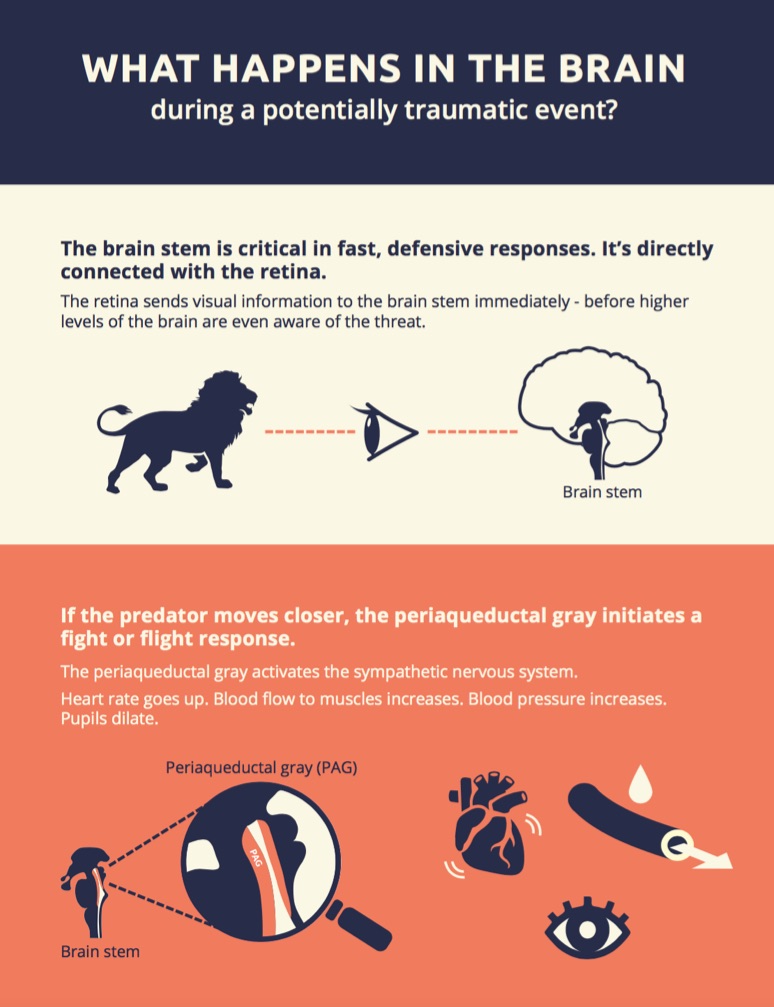 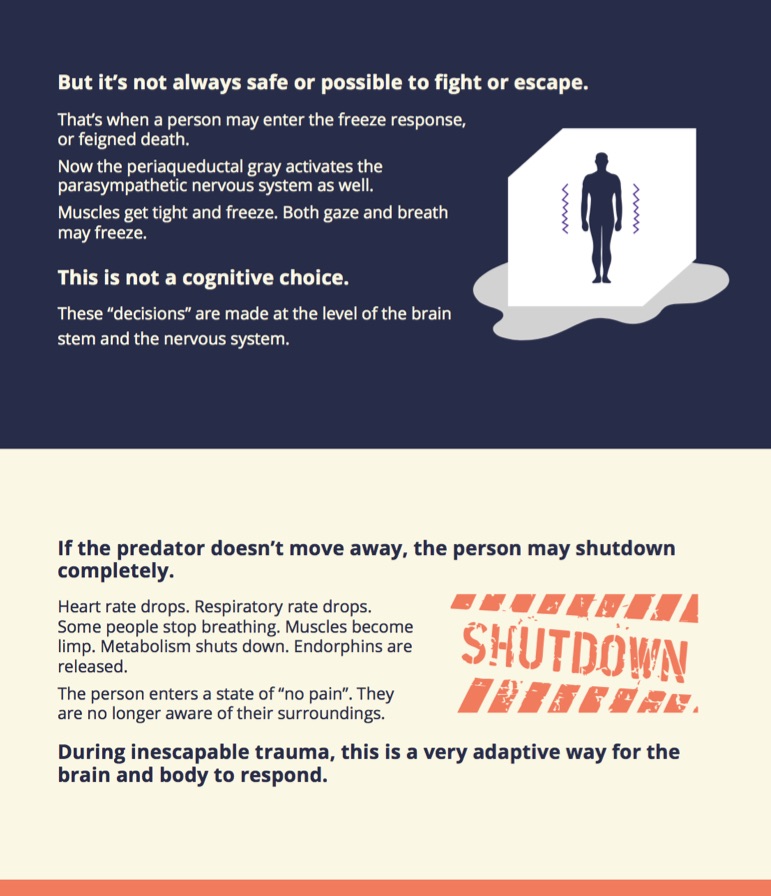 Interoceptive, body-oriented therapies can directly confront a core clinical issue in PTSD: traumatized individuals are prone to experience the present with physical sensations and emotions associated with the past. This, in turn, informs how they react to events in the present. For therapy to be effective it might be useful to focus on the patient’s physical self-experience and increase their self- awareness, rather than focusing exclusively on the meaning that people make of their experience—their narrative of the past. If past experience is embodied in current physiological states and action tendencies and the trauma is reenacted in breath, gestures, sensory perceptions, movement, emotion and thought, therapy may be most effective if it facilitates self-awareness and self-regulation. Once patients become aware of their sensations and action tendencies they can set about discovering new ways of orienting themselves to their surroundings and exploring novel ways of engaging with potential sources of mastery and pleasure.

Working with traumatized individuals entails several major obstacles. One is that, while human contact and attunement are cardinal elements of physiological self-regulation, interpersonal trauma often results in a fear of intimacy. The promise of closeness and attunement for many traumatized individuals automatically evokes implicit memories of hurt, betrayal, and abandonment. As a result, feeling seen and understood, which ordinarily helps people to feel a greater sense of calm and in control, may precipitate a reliving of the trauma in individuals who have been victimized in intimate relationships. This means that, as trust is established it is critical to help create a physical sense of control by working on the establishment of physical boundaries, exploring ways of regulating physiological arousal, in which using breath and body movement can be extremely useful, and focusing on regaining a physical sense of being able to defend and protect oneself. It is particularly useful to explore previous experiences of safety and competency and to activate memories of what it feels like to experience pleasure, enjoyment, focus, power, and effectiveness, before activating trauma-related sensations and emotions. Working with trauma is as much about remembering how one survived as it is about what is broken.

Drawing on his work with patients who have survived a variety of traumatic experiences — from plane crashes to rape to torture — Van der Kolk considers the great challenge of those of us living with trauma:In response to the trauma itself, and in coping with the dread that persisted long afterward, these patients had learned to shut down the brain areas that transmit the visceral feelings and emotions that accompany and define terror. Yet in everyday life, those same brain areas are responsible for registering the entire range of emotions and sensations that form the foundation of our self-awareness, our sense of who we are. What we witnessed here was a tragic adaptation: In an effort to shut off terrifying sensations, they also deadened their capacity to feel fully alive. 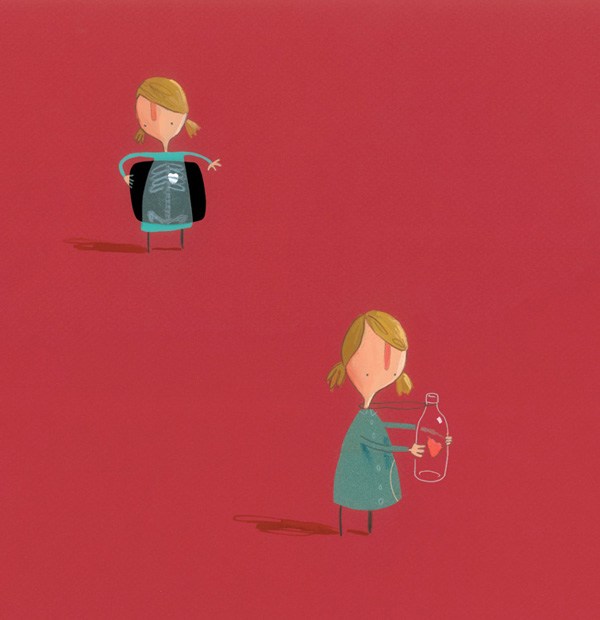 While this dissociation from the body is an adaptive response to trauma, the troublesome day-to-day anguish comes from the retriggering of this remembered response by stimuli that don’t remotely warrant it. Van der Kolk examines the interior machinery at play: The elementary self system in the brain stem and limbic system is massively activated when people are faced with the threat of annihilation, which results in an overwhelming sense of fear and terror accompanied by intense physiological arousal. To people who are reliving a trauma, nothing makes sense; they are trapped in a life-or-death situation, a state of paralyzing fear or blind rage. Mind and body are constantly aroused, as if they are in imminent danger. They startle in response to the slightest noises and are frustrated by small irritations. Their sleep is chronically disturbed, and food often loses its sensual pleasures. This in turn can trigger desperate attempts to shut those feelings down by freezing and dissociation.

In a passage that calls to mind philosopher Martha Nussbaum’s excellent subsequent writings on the nuanced relationship between agency and victimhood, Van der Kolk adds: Agency starts with what scientists call interoception, our awareness of our subtle sensory, body-based feelings: the greater that awareness, the greater our potential to control our lives. Knowing what we feel is the first step to knowing why we feel that way. If we are aware of the constant changes in our inner and outer environment, we can mobilize to manage them. But one of the most pernicious effects of trauma, Van der Kolk notes, is that it disrupts our ability to know what we feel — that is, to trust our gut feelings — and this mistrust makes us misperceive threat where there is none. This, in turn, creates an antagonistic relationship with our own bodies. He explains:

If you have a comfortable connection with your inner sensations — if you can trust them to give you accurate information — you will feel in charge of your body, your feelings, and your self. However, traumatized people chronically feel unsafe inside their bodies: The past is alive in the form of gnawing interior discomfort. Their bodies are constantly bombarded by visceral warning signs, and, in an attempt to control these processes, they often become expert at ignoring their gut feelings and in numbing awareness of what is played out inside. They learn to hide from their selves. The more people try to push away and ignore internal warning signs, the more likely they are to take over and leave them bewildered, confused, and ashamed. People who cannot comfortably notice what is going on inside become vulnerable to respond to any sensory shift either by shutting down or by going into a panic — they develop a fear of fear itself.

The experience of fear derives from primitive responses to threat where escape is thwarted in some way. People’s lives will be held hostage to fear until that visceral experience changes… Self-regulation depends on having a friendly relationship with your body. Without it you have to rely on external regulation — from medication, drugs like alcohol, constant reassurance, or compulsive compliance with the wishes of others. In its extreme, this lack of internal regulation leads to retraumatizing experiences: Because traumatized people often have trouble sensing what is going on in their bodies, they lack a nuanced response to frustration. They either react to stress by becoming “spaced out” or with excessive anger. Whatever their response, they often can’t tell what is upsetting them. This failure to be in touch with their bodies contributes to their well-documented lack of self-protection and high rates of revictimization and also to their remarkable difficulties feeling pleasure, sensuality, and having a sense of meaning.