07 Nov Coconut sugar, Is it Healthy By Steve alder

Posted at 10:35h in Blog by DarrenMaguire 0 Comments
0 Likes

Being a chocolate maker (someone who makes chocolate from scratch), I am always on the lookout for great sweeteners to use in Sacred Chocolate. Several years ago, a vendor approached me trying to sell me coconut sugar (aka coconut palm sugar as opposed to palm sugar which is not from a coconut tree) as a healthy sweetener because of its relatively low glycemic index of 35.
[fusion_builder_container hundred_percent=”yes” overflow=”visible”][fusion_builder_row][fusion_builder_column type=”1_1″ background_position=”left top” background_color=”” border_size=”” border_color=”” border_style=”solid” spacing=”yes” background_image=”” background_repeat=”no-repeat” padding=”” margin_top=”0px” margin_bottom=”0px” class=”” id=”” animation_type=”” animation_speed=”0.3″ animation_direction=”left” hide_on_mobile=”no” center_content=”no” min_height=”none”]
I was excited about the possibility of a good tasting, inexpensive sweetener that was also heathier than refined cane sugar. Could this be the ultimate sweetener redemption? It seemed too good to be true to my sometimes skeptical engineering mind. I asked for proof, and was directed to this published paper:
Click Here for Paper
My concerns with this study were twofold. The study was conducted on only 10 people. And, the study was done by a government who is one of the largest producers of coconut sugar in the world. Personally, I was hesitant to make an informed decision until more independent studies were conducted. Unfortunately, the only other study I have seen since shows a glycemic index for coconut sugar to be 54 as can been seen here:
Click Here to View Study
A whole raw chocolate industry has popped up over the last few years touting coconut sugar as a low glycemic sweetener citing the first study above. But, as can be seen from the second study, further studies need to be conducted since there is such a difference between the two: 35 vs 54. I am not the only one with concern regarding the ambiguity associated with what is known about the glycemic index of coconut palm sugar as evidenced by these links:
Link 1
Link 2
Link 3
Through my experience as a chocolate maker for almost 10 years, I have learned that sugar is a necessary evil when it comes to making delectable chocolate. So in general, I advise people to eat chocolate at the highest percentage cacao content possible, that is still enjoyable for them, and to choose a chocolate with a “healthier” sweetener than refined cane sugar. The idea that a sweetener is healthy if it is low on the glycemic index can be misleading. Certainly, a low glycemic index value is a desirable characteristic of a healthy sweetener for reasons I will not go into in this article (for more information, see this Link ), but other factors also come into play that can still make a low glycemic sweetener problematic to health.
For instance, coconut sugar happens to be approximately 70% sucrose (Click Here for study), which equates to about 35% fructose (View Here ). Fructose has been implicated in health issues such as metabolic syndrome, diabetes and obesity.
Read about Health Issues
What makes coconut palm sugar healthier than refined cane sugar besides its supposed low glycemic index is the fact that it is higher in minerals than refined cane sugar and also contains some inulin, a prebiotic starchy fiber.
Read More Here  and Here
Here is a typical nutrition facts panel of a popular brand of coconut sugar: 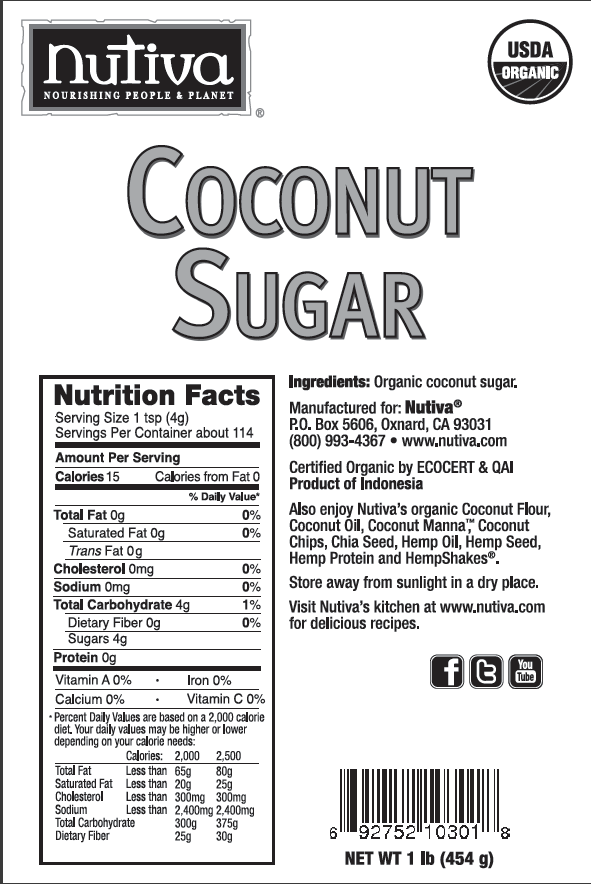 As I experimented with coconut sugar in my chocolate making, I noticed that the flavor profiles of the coconut sugar I obtained from various vendors differed significantly. I wondered why. I considered it was due to variations in crops and processing methods since coconut sugar is not a highly refined sugar—think Turbinado, Demerara, Muscovado, Rapadura and Molasses, all of which are less refined forms of regular refined cane sugar. However, information I obtained from a colleague, Frederick Schilling, founder of Dagoba Chocolate, Amma Chocolate and Big Tree Farms (a producer of coconut sugar), cast doubt on my reasoning behind the vast difference in flavor profiles I experienced. At a chocolate conference he told me that the Indonesian government had cracked down on a 40 or so container export shipment of coconut palm sugar that was cut with cane sugar. In other words, it was not pure coconut sugar, but a blend of coconut and cane sugar. (Note: I have not been able to find evidence of this event online.) I started thinking about what would motivate someone to do this. The only reasons I could think of were cost and/or flavor. As I researched further, I found out that coconut sugar is not a desirable sweetener in Southeast Asia due to its bitter aftertaste. I came to the conclusion that a possible motivation was to improve the flavor to more effectively sell it at a higher price. Also, since coconut sugar is an unrefined sugar, it retains many of the minerals inherent in it (as seen above) and therefore can be sold as a more nutrient rich sweetener, warranting a higher price. So, the key would be to make sure it tastes good so it is not rejected in the marketplace based on taste.
Are these factors that make the coconut sugar hype more of a racket than redemption? Regarding the health claim of a low glycemic index, it’s a hard call at this point until further research and lab studies are conducted; regarding whether or not your coconut sugar is pure, could be a tougher call. In my opinion, it is safe to follow the advice of the American Diabetes Association which says to treat coconut sugar the same as you would treat regular sugar:
Click Here for Article from American Diabetes Association[/fusion_builder_column][/fusion_builder_row][/fusion_builder_container]