Posted at 13:34h in Blog by DarrenMaguire 0 Comments
0 Likes

Although serotonin is well known as a brain neurotransmitter, it is estimated that 90 percent of the body’s serotonin is made in the digestive tract. In fact, altered levels of this peripheral serotonin have been linked to diseases such as irritable bowel syndrome, cardiovascular disease, and osteoporosis. New research at Caltech, published in the April 9 issue of the journal Cell, shows that certain bacteria in the gut are important for the production of peripheral serotonin.
“More and more studies are showing that mice or other model organisms with changes in their gut microbes exhibit altered behaviors,” explains Elaine Hsiao, research assistant professor of biology and biological engineering and senior author of the study. “We are interested in how microbes communicate with the nervous system. To start, we explored the idea that normal gut microbes could influence levels of neurotransmitters in their hosts.”
Peripheral serotonin is produced in the digestive tract by enterochromaffin (EC) cells and also by particular types of immune cells and neurons. Hsiao and her colleagues first wanted to know if gut microbes have any effect on serotonin production in the gut and, if so, in which types of cells. They began by measuring peripheral serotonin levels in mice with normal populations of gut bacteria and also in germ-free mice that lack these resident microbes. The researchers found that the EC cells from germ-free mice produced approximately 60 percent less serotonin than did their peers with conventional bacterial colonies. When these germ-free mice were recolonized with normal gut microbes, the serotonin levels went back up—showing that the deficit in serotonin can be reversed.
“EC cells are rich sources of serotonin in the gut. What we saw in this experiment is that they appear to depend on microbes to make serotonin—or at least a large portion of it,” says Jessica Yano, first author on the paper and a research technician working with Hsiao. The researchers next wanted to find out whether specific species of bacteria, out of the diverse pool of microbes that inhabit the gut, are interacting with EC cells to make serotonin. After testing several different single species and groups of known gut microbes, Yano, Hsiao, and colleagues observed that one condition—the presence of a group of approximately 20 species of spore-forming bacteria—elevated serotonin levels in germ-free mice. The mice treated with this group also showed an increase in gastrointestinal motility compared to their germ-free counterparts, and changes in the activation of blood platelets, which are known to use serotonin to promote clotting. Wanting to home in on mechanisms that could be involved in this interesting collaboration between microbe and host, the researchers began looking for molecules that might be key. They identified several particular metabolites—products of the microbes’ metabolism—that were regulated by spore-forming bacteria and that elevated serotonin from EC cells in culture. Furthermore, increasing these metabolites in germ-free mice increased their serotonin levels.
Previous work in the field indicated that some bacteria can make serotonin all by themselves. However, this new study suggests that much of the body’s serotonin relies on particular bacteria that interact with the host to produce serotonin, says Yano. “Our work demonstrates that microbes normally present in the gut stimulate host intestinal cells to produce serotonin,” she explains.
“While the connections between the microbiome and the immune and metabolic systems are well appreciated, research into the role gut microbes play in shaping the nervous system is an exciting frontier in the biological sciences,” says Sarkis K. Mazmanian, Luis B. and Nelly Soux Professor of Microbiology and a coauthor on the study. “This work elegantly extends previous seminal research from Caltech in this emerging field”.
Additional coauthor Rustem Ismagilov, the Ethel Wilson Bowles and Robert Bowles Professor of Chemistry and Chemical Engineering, adds, “This work illustrates both the richness of chemical interactions between the hosts and their microbial communities, and Dr. Hsiao’s scientific breadth and acumen in leading this work.” Serotonin is important for many aspects of human health, but Hsiao cautions that much more research is needed before any of these findings can be translated to the clinic.
“We identified a group of bacteria that, aside from increasing serotonin, likely has other effects yet to be explored,” she says. “Also, there are conditions where an excess of peripheral serotonin appears to be detrimental.”
Although this study was limited to serotonin in the gut, Hsiao and her team are now investigating how this mechanism might also be important for the developing brain. “Serotonin is an important neurotransmitter and hormone that is involved in a variety of biological processes. The finding that gut microbes modulate serotonin levels raises the interesting prospect of using them to drive changes in biology,” says Hsiao. 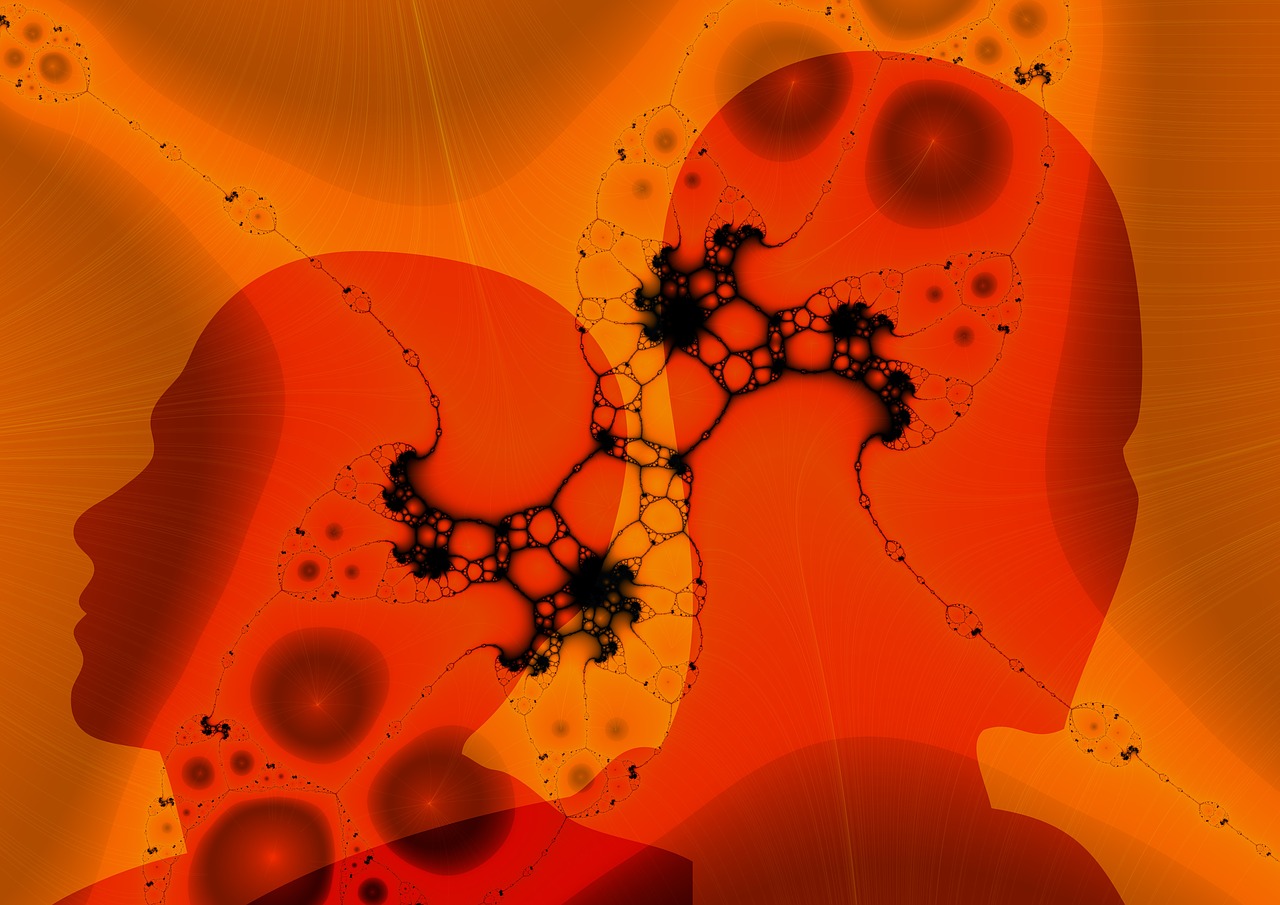 Our 5 Step Holistic Approach to Optimum Health is

Follow this program, Whether you’re battling multiple sclerosis, thyroid disease, autoimmune disease, IBS or Graves’ disease, or you simply want to put an end to nagging minor symptoms, Our Holistic approach, based on the latest scientific research is designed to fight and defeat the full spectrum of autoimmune diseases. If you would like to get more detail information about our 5 Step Holistic Approcah to Optimum Health you can purchase one of our Support plans specific to a Range of diseases below. Each Program Includes Easy to Follow comprehensive 5 Step Plan, Lifestyle guidelines, Diet Guidelines, Resources, Education ,Scientific Research and the increduble must have Gut Rebuilding Program full of world unique recipes and guides from expert fermentationist Darren Maguire.

What is Functional Health
Functional Health addresses the underlying causes of disease, using a systems-oriented approach and engaging both client and functional health therapist in a therapeutic partnership. It is an evolution in the practice of medicine that better addresses the healthcare needs of the 21st century. By shifting the traditional disease-centered focus of medical practice to a more client-centered approach, Functional Health addresses the whole person, not just an isolated set of symptoms. Functional Health therapists spend time with their clients, listening to their histories and looking at the interactions among genetic, environmental, relational and lifestyle factors that can influence long-term health and complex, chronic disease. In this way, Functional Health supports the unique expression of health and vitality for each individual.
Functional Health offers a powerful new operating system and clinical model for assessment, treatment, and prevention of chronic disease to replace the outdated and ineffective acute-care models carried forward from the 20th century. Functional Health incorporates the latest in genetic science, systems biology, and understanding of how environmental and lifestyle factors influence the emergence and progression of disease. Functional Health enables health professionals to practice proactive, predictive, personalized health care and empowers clients to take an active role in their own health. 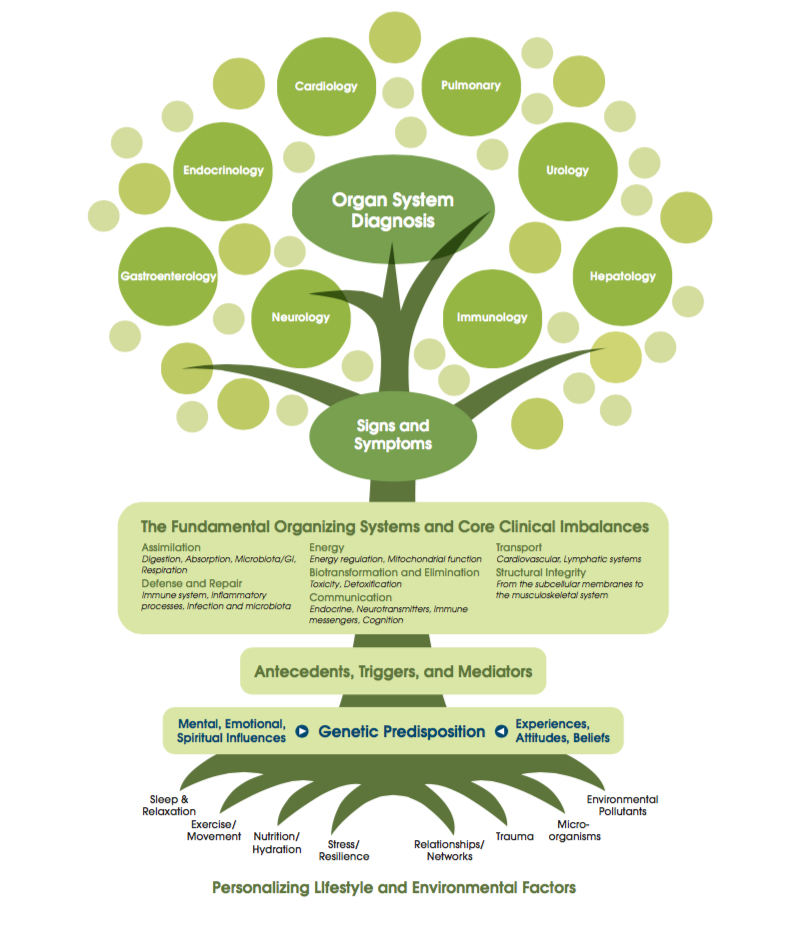 In order to keep a tree healthy and allow it to flourish, you need to support the most basic and essential elements first; the foundation: the roots and soil. Similarly, if a tree is not healthy, the first place you should look for answers is those same foundational elements. In Functional Health, the same approach applies to clients. The most important factors, and the ones we examine first when gathering information about the client, are the foundational lifestyle factors; sleep, exercise, nutrition, stress levels, relationships, and genetics. These are the roots and soil, which are in turn influenced by specific predisposing factors (antecedents), discrete events (triggers), and ongoing physiological processes (mediators), and may then result in fundamental imbalances at the trunk. These can eventually result in the signs and symptoms that are grouped into a diagnosable constellation that we call disease, represented by the branches and leaves.

“Functional Health is a personalized, systems-oriented model that empowers clients to achieve the highest expression of health by working in collaboration with a functional health therapist to address the underlying causes of disease.”